Check out the New Viking themed slot from Betsoft

Viking Voyage Due to Set Sail

There are some games that entertain for just a short while before losing their appeal, whilst others have a certain something about them which virtually guarantees longevity. Viking Voyage is a new title from Betsoft which definitely belongs in the latter group and was launched on Monday 22 April.

A Voyage of Cartoon-Style Excellence

Viking Voyage is one of those titles which adopts a cartoon style without coming across as at all immature. The game has five reels (and ten pay lines) which are presented against a fleet of ships at sea, and symbols include the playing card ranks 10 to A (all of which are exquisitely fashioned from good old heavy metal), a Viking helmet, an axe, a goblet, a raven and an assortment of Viking characters.

As well as looking good, Viking Voyage also sounds superb. A symphonic soundtrack with traditional flourishes (the sounding of Viking horns, and so on) helps to set the scene perfectly, and the reels make a pleasing mechanical sound as they spin, evoking a sense of cogs and pulleys that might well be at work somewhere. 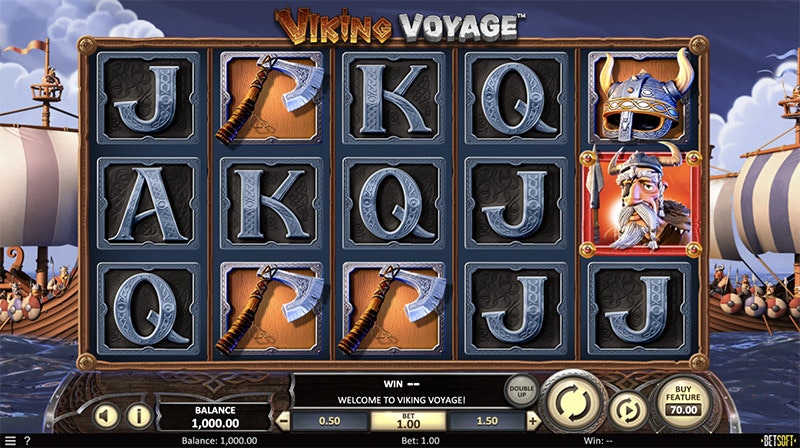 Viking Voyage is a nice looking slot with a symphonic soundtrack

This title is packed to the brim with special features which will help to ensure that it never gets stale no matter how long you play for. The first such feature is a Double Up bonus game which you can access after any standard win. This game gives you the chance to gamble 50% or 100% your prize on the toss of a coin, so simply pick Heads or Tails and hope for the best!

A Warrior King symbol serves as a wild and can even substitute for a scatter, which is a generous touch. Stack three wild symbols in the same column and the Warrior King will stand tall to reward you with a free respin.

The scatter symbol in this game is the raven, and will award scatter wins if you get three, four or five of them on the reels at the same time. In addition, reels 1 and 5 contain special Longboat symbols, and if you get both on the screen at the same time you will trigger a Free Spins round.

Should you not have the patience to wait for Free Spins to be triggered in the usual way, this game also allows you to buy the feature at any time. As you play, Bonus Buy coins can randomly appear on reels 1 and 5, and when this happens the cost of buying the feature will be reduced. Should the cost reduce to zero without you buying the feature, you will get a free spin to mark the event.

Let’s Get Ready to Plunder!

Viking Voyage is a rich and satisfying game with a perfectly executed theme, and it is therefore a title that we would encourage everyone to play at least once. Sail over to Mr Green or any other casino which offers Betsoft titles to begin your voyage, and may the mighty Odin be on your side!