A Beginner’s Guide to eSports Betting

Bet on eSports on Canadian Casinos

A Beginner’s Guide to eSports Betting. Visit any online casino that offers comprehensive sportsbook facilities (William Hill is a great example), and you will probably see that it is possible to bet on something called eSports. This word is variously written as eSports, e-sports and Esports, but no matter how it is presented, it means the exact same thing: electronic sports. 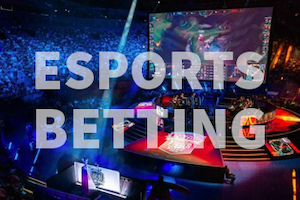 eSports don’t really have anything to do with traditional sporting events such as football, basketball or hockey. Rather, the term refers to playing computer and console games in a competitive setting. eSports events can involve either teams or individual players, and the aim is simply to beat all opponents.

If you’re wondering why this is any different to a group of friends playing video games in their spare time, the answer is money. eSports have become big business, with official competitions and tournaments offering colossal sums of prize money to those who rise to the highest levels. Many of those events and tournaments can attract thousands of live spectators and even greater numbers who watch the action unfold online.

This burgeoning sector is worth hundreds of millions, and some have said that it was worth close to $1 billion in 2020 alone. It is, therefore, no surprise that there is an increasing number of teams and players who devote their whole lives to eSports. These professional teams and players (who are referred to as eSports athletes) spend every waking hour either training, competing or recuperating, putting in just as much time and effort as athletes in more traditional sports.

Popular eSports to bet on

There are probably as many eSports in the world as there are regular sports, but some are more popular than others. Those are the ones that are most likely to be featured by sportsbooks that offer eSports betting, so it makes sense to take a brief look at the top three right here.

CS:GO (which stands for Counter-Strike: Global Offensive) is a first-person shooter that involves two teams of players trying to successfully achieve a particular task. The teams are known as the Terrorists and the Counter-Terrorists, and their mission objectives are invariably in opposition. For example, the Terrorists might have to try and plant a bomb, whilst the Counter-Terrorists have to try and defuse one. The first team to achieve its objective wins.

This is another game involving two teams, each of which has a base. The aim of the game is for each team to destroy the base of the opponents. Of course, it is also necessary for the teams to protect their own bases at the same time. The team which destroys the opponent’s base first is the winner. All of this takes place in a fantasy world, which will delight any fan of the RPG genre.

League of Legends is similar to Dota 2 in terms of its format and objectives. Two teams compete to see which can destroy the base of its opponents first, and the one that succeeds wins. The difference here is that the action takes place in a world where fantasy meets horror, and participants can improve their abilities by collecting gold as they play.

Although there is plenty of variation in the eSport games that are currently being played, the main betting markets that are available tend to be fairly standard. The most common eSports betting markets are as follows.

This market is the simplest of all and requires you to predict which team will win the match outright. If you bet on a team and it wins, so does your bet. The odds available for each team will depend on how the sportsbook views their respective chances based on past performance and current form.

In some eSports matches, the odds for the favoured team can be relatively low, so Match Betting Handicap markets exist to even those odds up a little. Here the underdog team is given a theoretical advantage, and the favoured team is given a theoretical disadvantage. Bet on your preferred team, and if they win with the help of the advantage or in spite of their disadvantage, your bet will also win.

Many esport competitions have a ‘best of three’ format. This means that up to three games will be played, and the team that wins most of them will win the competition. The Correct Score market allows you to bet on how a team will fare overall, so you could bet on the favourite or their opponents to win by 2-0 or 2-1. Because this is usually a trickier bet to land than the others discussed, it tends to pay better odds.

We said a moment ago that a competition often consists of several games. Each of those games is referred to as a map, usually because it occurs in a different area in the gaming world. This market allows you to bet on a team to win a particular map, rather than the match as a whole. If you understand set betting in a tennis match, this is virtually the same thing.

eSports tournaments have some of the biggest prizepools in sports and you can get the slice of the action by betting on the winners!

Just as soccer has the World Cup and football has the Superbowl, so eSports also have their fair share of headline tournaments. Two of the biggest are the Official World Championships and The International.

The Official World Championships have taken place every year since 2009. This competition, organized by the International eSports Federation in South Korea, sees eSports athletes from 85 nations compete for supremacy in several different games.

The International is another annual tournament, but this one is exclusively for Dota 2 players. The first tournament took place in 2011 when the prize pool was worth $1.6 million. That might sound like a lot of money, but the prize pool has grown steadily ever since, and in the 2019 tournament, it was worth an eye-watering $34.3 million.


The best is yet to come!

Given the amount of money that is up for grabs, it’s no wonder, so many gamers want to be eSports athletes. The good news for those of us who lack the necessary gaming skills to become champions is that we can also make money by betting on those who are experts. With gaming technology improving every year, eSports look set to be around for the long haul, and we’d be more than happy to bet that the best is yet to come.

What games are eSports?

We mentioned above some of the biggest games in eSports, but there is plenty more video games which have professional tournaments. These games can be categorised as fighting games, first person shooters (FPS), real-time strategy games (RTS) or multiplayer online battle arena games (MOBA).

Here are the eSports games you can watch, bet or play as a professional!

✅ Is eSports betting legal in Canada?

Online sports betting, including eSports betting, is completely legal in Canada. Just make sure you choose one of the recommended and licensed online casinos, and you can be sure to have a good time and keep your data and money safe.

✅ What is a map in eSports?

You can bet on different things in eSports, one of these is the map winner.

A competition often consists of several games. Each of those games is called a map, usually, because it occurs in a different area. With this market, you can bet on a team to win a map, not the whole game.

✅ Where can I bet on eSports?

You can bet on eSports on a lot of betting sites. Take your pick from our recommended Canadian betting sites, which offer eSports so you can bet on your favourite leagues at fair odds and get a generous welcome offer.