Slots with the best RTP in Canada

We all know that online slots are games of chance, but that doesn't mean that all slots are equal, the best paying slots are far more generous to players than others. Every slot available has a Return to Player or RTP figure associated with it, and that figure represents the percentage of money taken that is given back to players in the form of prizes. For example, a game with an RTP of 97% would be expected - on average and over the long term - to pay out $97 in prizes for every $100 taken in bets.

RTP figures aren't exact but are estimated based on data gathered from huge numbers of simulated spins. In a nutshell, the higher the published RTP figure is for any given game, the better it is for players, at least potentially. You can find the RTP figure of most slot games by checking out the rules page for the game you are interested in. 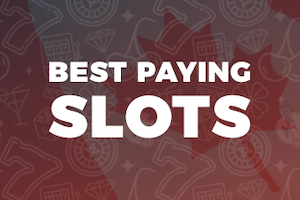 Five of the Best RTP Slots in Canada

Now that you know why you should look out for the RTP %, here are five of the best RTP slots in Canada as things stand right now:

With an RTP of up to 99.0%, Mega Joker is at the top end of the RTP charts not just in Canada, but in most countries around the world. This three-reel slot was released by NetEnt in 2013 and features a Supermeter mode in addition to the base game. The Supermeter mode involves an element of skill, and this is what will give you the chance to maximize the RTP to 99%. You should therefore expect to experience a lower RTP until you have had time to get to grips with the game and develop some skill in the Supermeter mode. Our advice would be to keep your stakes to a minimum until you get to that point and to only increase them as your skills improve.

While it isn't the most famous game in the world, Chess Mate is one of the best paying slots as far as its RTP figure is concerned. The standard published RTP is 98.72%, but the game also has a built-in progressive jackpot feature that can be activated or deactivated by each casino that offers it. When the progressive jackpot feature is active, the RTP improves to a whopping 99.25%, making it even better than Mega Joker, but we rank it here based on the progressive being inactive. Whatever the case, the game itself delivers a generous helping of old-school fun, complete with a soundtrack that reminds us of those heard in 8-bit console games. Even better, you don't need to know how to play chess to stand a chance of winning - simply spin the reels and keep your fingers crossed.

This five-reel 1429 Uncharted Seas slot from Thunderkick has been a big hit ever since it set sail in 2014, and not only because it boasts an impressive RTP of 98.5%. With maritime-themed gameplay that appears to take place on a rather sparse map (presumably because these seas are unchartered) your task is to spin the reels and discover what the oceans have in store for you. Symbols include quaint illustrations of mermaids, sea monsters, a compass and various astronomical bodies. Successfully chart your course to the bonus game and you could win as many as 50 free spins.

Swindle All the Way

Those of you who don't mind playing a Christmas-themed game out of season should take a look at Swindle All the Way from Realtime Gaming, because as well as having an RTP of 98.5%, it also gives you the chance to win randomly triggered progressive jackpots. This game is based around the antics of two comedic crooks who have recently escaped from jail and are now doing a little breaking and entering in a festive-looking neighbourhood. Imagine a cartoon version of Home Alone without a Macaulay Culkin and you'll have a pretty good idea of what to expect - just add a fantastic Swindle All the Way feature which can give you up to 60 free spins with a multiplier of up to x33.

Play Swindle All the Way at BoVegas Casino

As the name of the game suggests, Lucky Mermaid video slot is based on the adventures of a mermaid who just might be able to help you find a fortune at the bottom of the ocean. This is another title which has a published RTP of 98.5%, and it has a rather distinct visual style which you will either love or… well, love not quite so much. The background visuals are nicely done, but the symbols themselves (of a mermaid, dolphin, seashells, sandcastle and so on) look like they've been drawn for publication in a child's colouring book. Or actually by a child, depending on how harsh you want to be. Visuals aside, the gameplay isn't bad, and the audio is fairly well done, albeit in a minimalist way, but really this title makes our list solely because of it's undeniably good RTP figure.

All of the games featured here are well worth playing if your sole concern is how generous they are to players. However, do remember that RTP figures are estimated over a huge number of simulated spins, and not the number of spins that you would normally play in a single session. Whilst a game might return a certain percentage of cash to players over the long term, it can still produce wide variations in the short term, so you would do well to bet with that in mind.

By the same token, slots that offer lower RTP figures can also payout well above the average in the short term, so if you come across one that bowls you over, don't let a slightly more modest RTP prevent you from enjoying it.

What does RTP mean in online casinos?

Every online slot has a Return to Player or RTP percentage which represents the percentage of money given back to players in the form of prizes. For example, a game with an RTP of 97% would be expected - on average and over the long term - to pay out $97 in prizes for every $100 taken in bets. The highest RTP's indicate the best paying slots.

✅ How do I pick a good slot machine?

Find a video slot you will enjoy, with your favourite band, favourite film or other exciting characters and effects. You should also look at the RTP of the game. The best paying slots have over 96% RTP, which means you have a better chance of winning.

✅ How often do slot machines hit the jackpot?

There is no set formula on how often a slot machine hits the jackpot. Slots are equipped with a Random Number Generator, sometimes meaning the jackpot doesn’t drop very often, and the winnings are sky high, and sometimes jackpots hit after a few days of the previous one.

✅ Is it better to bet max on slot machines?

Betting the max on a slot machine can result in higher winnings. But you can also lose more, so you should decide based on your bankroll. Some progressive jackpots can only be won at the highest stake level.

✅ Is there a trick to slot machines?

✅ Is it better to stop the slot reels?

You don’t need to stop the reels, they won’t change the outcome of the spin. If you stop the reels or skip the animation, you are probably hitting the spin button much quicker, playing more in the same amount of time. Manage your bankroll better, slow down your game and get more game time!

✅ Is it better to play slots fast or slow?

Playing fast or slow won’t increase your chance of winning. But if you play fast, you will get less entertainment value out of your money and might lose your bankroll more quickly. Please slow down, enjoy the game and all its graphics. It won’t help you win more.