New slot inspired by a classical masterpiece by Grieg

Prepare to Enter the Hall of the Mountain King

Hall of the Mountain King is an exciting new slot from Swedish game developer Quickspin. If the new title sounds at all familiar to you then it wouldn’t be at all surprising, because the game is inspired by In the Hall of the Mountain King, which just happens to be one of the world’s most recognisable pieces of classical music.

Composed in 1875 by Edvard Grieg, it is inconceivable that the author of this incidental score would ever have imagined it inspiring a game, but almost a century-and-a-half later, that’s exactly what has happened. Quickspin should be proud of themselves, because Hall of the Mountain King does full justice to the music which inspired it, and is more than good enough to become a classic in its own right.

This is a five-reel slot game in which you steadily make your way towards the Hall of the Mountain King, which - as you might have guessed - is located deep in the heart of a remote mountain. The mountain king is a troll, and he is the most imposing symbol on the reels. Other symbols include the playing card ranks 10, J, Q, K and A, several other troll characters and the Mountain King’s hammer.

Hall of the Mountain King has a very solid look to it, with symbols which might well have been etched into blocks of granite. You begin your journey in a cave entrance to the mountain, and so the sound effects echo around the chamber. The soundtrack itself features a thunderous rendition of the famous piece by Grieg, the increasing pace of which perfectly matches your progressive journey to the great Hall itself.

A vertical stack of multiplier blocks to the left of the reels serves as a meter. Land a win with a Wild symbol and your win will be multiplied by the value of the indicated block. Get three scatter symbols and you will trigger a Free Spins bonus game. Every time you win during this stage, the Mountain King will destroy a block from an upgrade column of symbols to the right of the reels. Blocks on the multiplier stack may also be destroyed to make room for bigger multiplier values. When the last block on the upgrade column has been destroyed, you can progress to additional stages of the bonus game, which feature even more powerful whirling wilds. 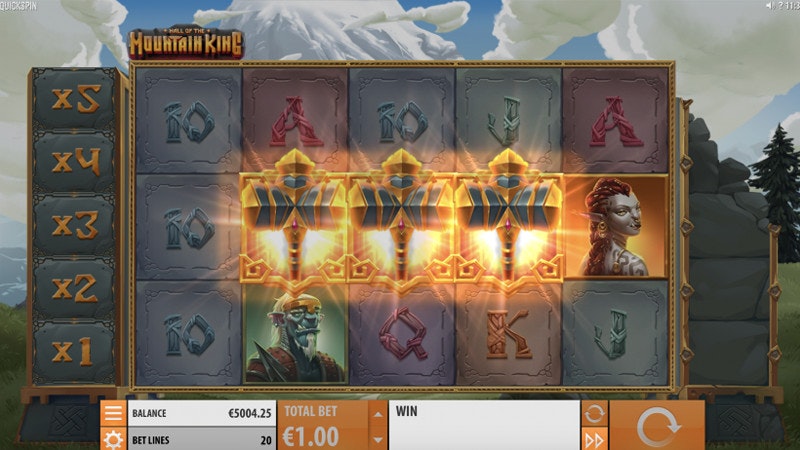 Prepare for the Adventure of a Lifetime!

Hall of the Mountain King is an epic game, and the best way of discovering its many layers is to play it for yourself. The game lands on Tuesday 14 May, so watch out for its arrival at LeoVegas and other venues which offer Quickspin titles, and may your quest be a successful one!