Dead or Alive 2: The Wild West Slot Sequel is Here!

When Swedish game development company NetEnt released its Dead or Alive slot around a decade ago, it couldn’t have anticipated just how popular the western-themed title would be. Today, Dead or Alive remains one of the best-loved games around for anyone who likes to imagine themselves living in the Wild West, but that could soon change, because its creators have just rebooted the epic title by launching its long-awaited sequel, the highly volatile Dead or Alive 2!

The Best Just Got Better

Dead or Alive 2 is a five-reel title with nine pay lines which retains all of the flavour and style of the original game, but then takes things even further. Symbols used in the game include the playing card ranks 10, J, Q, K and A, a cowboy hat, a holster, a pair of cowboy boots, crossed pistols, a sheriff’s badge, a bottle of bourbon and several outlaws who are in desperate need of being brought to justice. The reels themselves are set against a western backdrop which changes as you progress through the game.

The artwork in Dead or Alive 2 is truly fantastic, and does a great job in immersing you in the Old West. The audio element of the game is also very important here, and comprises an authentic soundtrack and numerous sound effects, such as a gun chamber being rolled as the reels spin and gunshots when you make winning combinations of symbols. 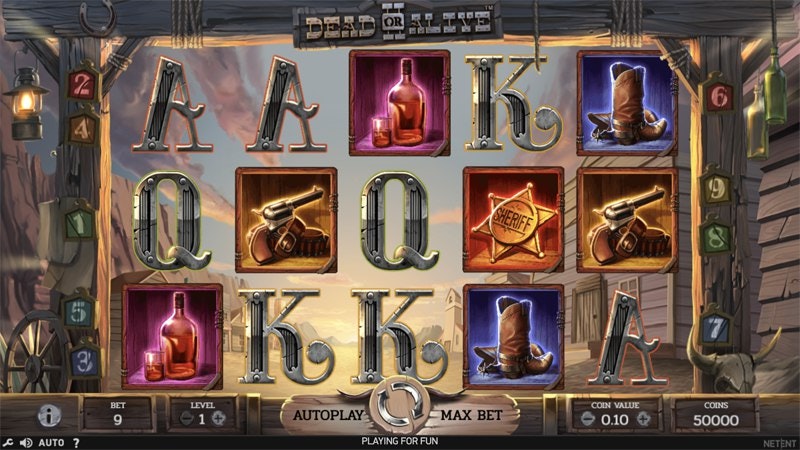 The game design in Dead or Alive 2 is truly fantastic, well done NetEnt!

There are no fewer than three different free spin rounds that can be triggered in Dead or Alive 2, and those are referred to as the Train Heist, Old Saloon and High Noon Saloon. Each of those rounds is a real treat, especially when encountered for the first time, so we won’t spoil the surprise by going into detail here. Suffice it to say that you won’t be disappointed!

A Proud Moment for NetEnt

"Given Dead or Alive’s immense and enduring popularity, it is a real responsibility to deliver a sequel to a game held in such high esteem", said Henrik Fagerlund, who is Managing Director of NetEnt. "We’ve listened to the players and the slot community in this project to help ensure that Dead or Alive 2 is the best game it can possibly be.

We are incredibly pleased with - and proud of - the outcome of Dead or Alive 2 and are sure it will be a hit with those who love the original as well as a whole new generation of fans. It’s definitely a game for fans of high volatility.

Shoot for a Big Win!

Whilst there will always be a place for the original Dead or Alive game, Dead or Alive 2 is sure to become the new favourite of fans of the Wild West genre. Mosey on over to LeoVegas Casino to see what all the fuss is about, and go get those outlaws!