Master the game that casinos don't want you to learn!

Getting Started with Video Poker

Video poker games might not be as widely publicized as slots or table games, but they are hugely popular at both traditional and online casinos. Developed in the mid-1970s, video poker combines the much older card game of Texas Hold’em poker with the convenience of a slot machine. While a traditional poker game requires the presence of at least two players before it can begin, a video poker game is designed to be played by just one player. All of the action takes place on a video screen rather than at an actual poker table. 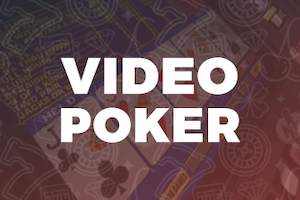 How to Play Video Poker

To begin a video poker game, you simply need to press the DEAL button on the machine that you have decided to play. The screen will then deal you a hand of five playing cards, and you will be given the chance to discard as few or as many of those cards as you wish while retaining the others. The cards that have been discarded will then be replaced with different cards, and the new hand of five cards will then be assessed to see whether or not it is a winner. The aim in this game is to get the highest-ranked poker hand that you can. While the hands that win prizes can and do vary slightly from game to game (as we will explain shortly), the majority of video poker games will award prizes for the following hands, which are presented here in the order of most valuable to least valuable:

The better the hand you make in a game of video poker, the bigger your prize will be, with the top prize being awarded for making a royal flush.

There are many different video poker variations, which can give you different odds of completing a winning hand. For example, in a game called Deuces Wild, the four deuces in the deck all serve as ‘wild cards,’ which means that they can stand in as a substitute for any other card. Similarly, in a game of Joker’s Wild, the deck will also contain a joker card that serves as a wild.

Other common variations can make it easier for you to win a prize (for example, Tens or Better will pay you for one pair of 10’s or better) or award bonuses for making certain hands at the higher levels.

Why You Should Play

Video poker games are well worth playing for a couple of reasons. The first is that, unlike slots, they can be played strategically, bringing an element of skill into the game. The more skilled a player is in knowing which cards to retain and which to discard after the initial deal, the more chance they will have of winning.

The second good reason to play video poker is related to the first, because the more skilled a player is, the lower the house edge against him will be. In many games, the theoretical Return to Player percentage can be 98%, 99% or even higher if a player learns to play according to the best possible strategy.

Given the huge potential RTP percentages of video poker games, perhaps it isn’t surprising that casinos don’t promote them very much. After all, why promote a game that gives 99% of takings back to players when you have plenty of other games that only return 96% or even less?

While it can be fun to play Video Poker in a very casual way, as you would a slot machine, it is much more engaging - and potentially more rewarding - to have some kind of strategy. This will help you make good decisions about which cards to discard and which to keep for every hand.

A Simple Strategy for Beginners

There are lots of Video Poker strategies out there, but if you are new to the game, you will want to adopt a fairly simple strategy that can help you to win more often while avoiding some common mistakes. Luckily, we have such a strategy, so commit the following rules to memory or write them down on a piece of paper so that you can use it as a handy ‘cheat sheet.’

Simply throwing money into a Video Poker game and hoping to get lucky straight away is never as effective as having a sensible approach to bankroll management. The most serious Video Poker players tend to adjust their bankrolls according to the features of the specific game that they intend to play and the length of time that they want their sessions to last for, but such lengths aren’t necessary for those who are relatively new to the game.

A better rule of thumb for beginning Video Poker players is simply having a fixed bankroll for the session, which is 100 times the amount of money you want to bet on each hand. This should give you around an hour or two of playing time, depending on how your luck fares along the way.

One of the Best Games Around

Given that casinos like to keep video poker quiet, and that they don’t often allow you to play it to unlock welcome bonuses, it’s safe to say that this is a great game for players. You’ll have to develop some skills in order to maximize your chances of winning, but if you are willing to do that, video poker can be just as rewarding as it is enjoyable to play.

You can play video poker games developed by Microgaming, Play'n Go and Netent and you can find them in most casino lobbies available in Canada.

Now that you know how to play video poker, you just might want to have a go at a few games for yourself. There are plenty to choose from, but here are four of the best to get you started…

This is a straightforward video poker game from Wazdan which has a distinctly American theme. You’ll be paid on hands of Two Pair or better, with that hand paying three times your bet. Hitting a Royal Flush will win you 400 times your bet, which is decent enough, but you can also get 5 of a Kind in this game for a payout of 800 times your stake.

A smooth soundtrack plays throughout, and a stylish sports car is positioned at the top right of the screen. The licence plate on the car shows a MINI BONUS value which increases every time you get a single pair of J, Q, K or A. When the counter reaches 100, it will be ready to pay out, and will do so when you next land the same pair of cards.

Jacks or Better from Microgaming is a classic video poker title that has been around for almost two decades. It has a simple design which makes it perfect for beginners and seasoned players alike, and that is probably why it is still one of the most popular games around.

As the name of the game suggests, you’ll be paid for a pair of Jacks or better, so if you get JJ, QQ, KK or AA you’ll win the smallest prize, which is equal to your bet. Two Pair will pay twice your bet, and the top hand here is a Royal Flush, which pays 800 times your bet.

Even modest wins can be useful, as you’ll be given the option to gamble any win in an attempt to double it. This doubling opportunity can be turned off if you have no interest in taking advantage of it.

Loose Deuces from Real Time Gaming is one of the best video poker games available as far as its RTP value is concerned. On average, the game pays 99.07% of money wagered back to players, and you won’t get a much better deal than that.

In this game, all deuces (2 value cards) serve as wilds, and can therefore substitute for any other card. That makes winning a lot easier, so you’ll need to achieve a 3 of a Kind or better to win. Hit a Royal Flush to win 300 times your bet or get a hand of 4 deuces to win 500 times your bet.

A doubling option gives you the chance to improve modest wins, but do note that the maximum win in this game is 800 times your bet.

This is another Jacks or Better game, but this one is from Playtech. This is a much more recent title than the Microgaming version discussed earlier, so you’ll notice that the visuals and audio are a tad more impressive.

As you would expect, you will win with a hand of Jacks or better, and the prizes increase in line with the strength of your hand. For the most part, the prizes paid will be proportionately the same no matter how many coins you play per hand. You’ll therefore be paid 50 times your bet for a Straight Flush regardless of whether you are playing with the minimum of 1 coin or the maximum of 5 coins per hand.

Play Jacks or Better at Casino.com