Throw the dices at the best Canadian casinos

Shoot the dices at these Canadian online casinos

Craps is a casino game where a player rolls two dices, and other players can bet on the outcome of the roll.

Craps is a popular game everywhere, but it has a big fan base in Canada and the USA. Creating online craps was a challenge for game developers since it was challenging to develop the dice game mechanics on a computer. It is also difficult to recreate the social experience craps create in casinos. Luckily, in recent years developers made a lot of progress and online craps are becoming as popular as it's land-based casino version. You can also play craps in online live casinos for an even more exciting experience. 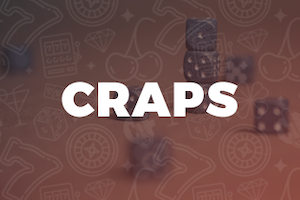 The history of craps

When it comes to the history of craps, there are several theories out there, and most of them contain a grain of truth. Craps are thought to have evolved over time into becoming what is now knowns as craps.

The earliest versions of the game might have been played by Roman soldiers who used pig knucklebones as dice and their armour as a table. Others think it was an Arabic dice game, and merchants brought the game to Europe in the 12th century.

How craps has progressed in the modern world Craps was born in Europe and the UK and took a while to spread. It first made its way to the US in the 18th and 19th centuries. It was introduced by a politician, who was also an avid gambler named Bernard Xavier Phillipe. It was later discovered that players could rig the game in their favour through a fixed dice. This made John H. Winn come up with an updated craps version that brought a Don't Pass Bet area in 1907. This still remains for the game is known today and came in handy to eliminate players cheating. The game gained popularity quickly, and once the once online casinos showed up, online craps became popular as well.

The online version of the game began appearing online as early as 1994. The game grew further after live casinos were introduced, and now you can play with a live dealer through a video stream. This is the closest experience you will get to the land-based craps experience without leaving your home.

It's easy to use credit cards, prepaid cards or e-wallets when depositing at online casinos

How is craps played?

Craps, which also goes by other names, such as street craps, rolling dice, and shooting dice, is a game where players bet on the roll outcome.

The "shooter" rolls two dice, and the others are placing the bets on the table. Craps payouts count on how a group of players opts to play, creating a unique and varied experience every time the game is played.

Each round of the game has two crucial parts: the "come out" and the "point". The "come out" comes first. In case the value of this roll is 2, 3, or 12, the shooter has crapped out. In case the shooter rolls 4 through 6 and 8 through 10, he or she has established the point. The shooter must roll the number in question again before a 7, so those who have bet win. The game remains the same whether playing at a land-based casino or at an online casino, except that you can't roll the dice.

Each player rolls the dice in turns. Everyone places bets on the outcomes, regardless of being the shooter or not. The shooter continues throwing the dice until they roll a seven at the wrong time, also termed "Sevens Out." Considering that craps are a game of rounds, the first roll is termed "Come Out" roll. A round can contain one roll or a bunch of rolls depending on the outcomes of a roll. A shooter continues to roll the dice until a losing combination.

The rules on online craps

The game is played by the same rules online as in a land-based casino. The only difference you'd find between online craps and that game you'd find in a casino has to do with the odds. In a land-based casino, the house advantage is relatively high in craps, so you will be happy to hear that the algorithms created a fairer odds towards the players in online casinos.

Microgaming is a leading software developer that creates online craps games. You can play the game however you want to: in minimalistic interface showing little more than just a virtual table and a dice being rolled, or a game where you have cheering in the background like in a land-based casino.

Craps tournaments take the excitement, and fun players get from regular games to a whole new level. To take part, players are required to pay the house some form of entry fee, which could vary from $5 to $25, depending on the site you choose. The rules and bets remain the same. There are a few differences to note:


How to play online craps

This game's rules and layout can easily intimidate novice players, but most online casinos have made the experience as pleasurable as possible. It would take little time to learn about online craps, which offers some of the best odds in online casinos.

Online craps is a favourite game for most online gamblers. It's pretty simple to learn the game and win some money. The rules are pretty much the same across the online and real-life versions. While it might look complicated first, online casinos have software that makes the game easy and rewarding to all levels of players so you can trial it with confidence at any Canadian casino.

✅ How much strategy do I need in craps?

You don't need much strategy. There isn't much skill to rolling the dice, and all you need to do is learn about the various bets, then choose the ones with favourable odds.

✅ Do I have to be the shooter?